The Giant panda is a v_______ bear species inhabiting the subtropical forests of China.

The Giant panda’s historic geographical range covered Central and South China, but today only small and i_______ populations can be found. Pandas used to inhabit lowland areas as well, but due to d_______ and other factors, today their habitat is limited to highlands.

Giant pandas spend most of their time on the ground, but they can also climb trees or swim. They can also stand on their hind legs, but this p_______ is tiring for them. They use every opportunity to rest.

Bamboo leaves, shoots and stems make up 98% of the Giant pandas’ diet. They usually eat while s_______, so their front paws are free and can be used to hold the food. Pandas are active at dusk or at night, during the day they sleep in tree hollows, rock c_______ or caves. They make tunnel-like paths in bamboo forests, connecting their f_______ area with their resting place. They spend 10-12 hours sitting and feeding a day. They make sounds s_______ to those produced by sheep. 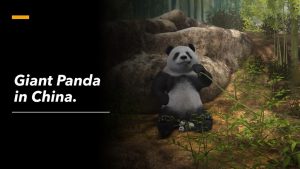 Unlike other bears, Giant pandas do not hibernate in the cold season, instead, they move to low-lying grounds with higher temperature. The life e_______ of Giant pandas in the wild is about 25 years.

Their s_______ bodies are typical of bears, the only difference being the black-and-white pattern of their fur. Their head seems to be larger than that of other bears: This is due mainly to their strong jaw m_______ and the enlarged bones that provide an a_______ surface for those. This is why pandas’ skulls are roundish.